A website, Discord bot, and API, providing an accurate countdown to Christmas since 2017.

A website, Discord bot, and API, providing an accurate countdown to Christmas since 2017. 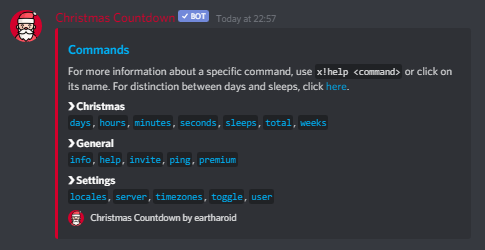 The Christmas Countdown project started in 2017 with a simple single-page website (countdowntoxmas.tk). It was terrible code which was mostly copied and pasted, but it was my first real website and it worked. I made it because I wanted something pretty to put on my 7" Rapsberry Pi touchscreen. The Christmas Countdown website now has thousands of visitors and the Discord bot has been added to over 8000 servers.

The CountdownToXMAS (countdowntoxmas.tk) website was released. It featured copy-and-pasted jQuery code and it sucked, but looked nice.

The orginal Christmas Countdown Discord bot was released in November with the Santa hat icon. It was a single JavaScript file. The website got a couple of new pages, which were white text on a dark blue background.

In the first week of September development started on v3 of the Discord bot, which was released on October 24th. The bot was completely rewritten and had new features, including translations and much needed timezone support for users and servers. Work on the new website started the day after the bot was released.